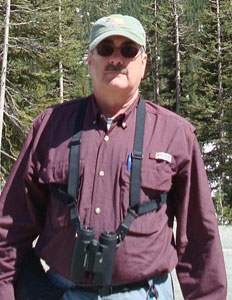 Stanley (Skip) Almoney was born and raised in York, Pennsylvania. In 1970 upon receiving his PhD in Nuclear Physics he came to Houston to work as a geophysicist for Texaco. He took early retirement and spends his time with various volunteer endeavors.

Skip formed a Texas nonprofit corporation, Friends of Mandell Park, to improve, protect and assist in the maintenance of the newly acquired City of Houston’s Mandell Park.  The group raised over 1 million dollars and the renovation is completed.  Skip was president from 2004 through 2014, and served as President/Treasurer from 2016 until he stepped down from leadership positions in November 2019. During the ten years from 2004 to 2014 he has contributed over 1750 hours of volunteer time to Friends of Mandell Park.

In addition to bird watching, he also enjoys bike riding. He and his wife Jonni live in the Houston Museum area and enjoy the many fine dining experiences as well as cooking at home. They both enjoy traveling, ballet, live music and reading.

The estuaries of Anahuac National Wildlife Refuge are an important nursery for the fish and shellfish species found in the Gulf of Mexico. Beyond the estuaries, the saltwater marshes ease inland. Fresh water from an occasional storm and the inflow from rivers and creeks helps to keep saltwater out of the freshwater marshes, as well as providing nutrients and sediments.  With the change in salinity level comes a different plant community. Though remnant stands of native prairie can be found…

Bird Galveston’s East End with one of the world’s most famous birders! In 1998, Greg zig-zagged 130,000 miles across the USA hoping to reach at least 700 species of birds in one calendar year.