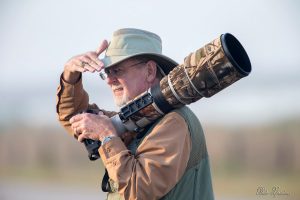 David Paulissen is a long time avian and wildlife photographer. Shooting since childhood has groomed his passion for photography and honed that vision into a love of birds and wildlife. He also creates portrait and fine art photography. David lives in the Galveston Bay area of Texas and frequents the bays, ponds, area refuges and state parks nearby. Perhaps his favorite areas are Galveston Island, High Island, Brazos Bend State Park, and Anahuac and Brazoria National Wildlife Refuges, all of which are within easy travel of his home in Dickinson, TX.  He began photography using film and has been creating digital images since 2003.

David has been juried into many art shows including those at JoMar Visions, Artcrawl Houston and the Art Alliance of Clear Lake. In 2014 one of his images was one of twelve chosen in the Galveston Nature Tourism FeatherFest  juried show. His work also has been feature in Life is Good magazine. His images are hung in homes and offices in the Clear Lake Area of Texas. You may visit his site at dapaulissenphotography.com.

📷Birds in Flight From a Boat #2

Join David Paulissen on this unique experience on Galveston Bay to photograph birds in flight from a boat. One of the best ways to learn to photograph birds in flight is to practice and this trip will provide ample opportunities to do just that! The number of birds, Brown Pelicans in particular, is amazing, providing many photo opportunities as the birds come and go from the islands. In Galveston Bay, there are man-made islands where large numbers of breeding birds nest. This special trip, arranged by FeatherFest, allows us to approach these islands while following a special protocol to minimize impact on the colonial birds. There are no restrooms on the boat and we will not land on any islands.