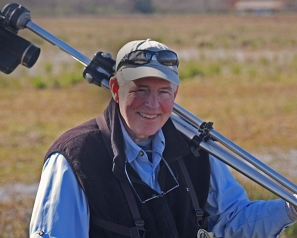 Annually, Damien Carey leads field trips for Houston area birding and nature groups. He’s lead field trips throughout Texas. He founded the Lake Houston Area Nature Club in 1995. In 1999, he established and compiled the Lake Houston CBC and Sheldon Lake SP (SLSP) WBC. He also compiles the Texas Colonial Waterbird Census of SLSP’s rookery islands. Carey rewrote the “Birds of Sheldon Lake SP” in 2006. He serves on the advisory board of Legacy Land Trust (LLT) and conducts habitat valuations and baseline bird surveys in support of its conservancy efforts. Sparrows are a passion of Carey’s and he conducted several surveys for Project Prairie Bird. He has served as president and a director of the Friends of Sheldon Lake SP since he founded it in 2004. He speaks on behalf of conservation, birds and birding, to civic and service clubs. He is active in advocating for more access to the outdoors for families. With his wife Caroline, he established a nature club for at-risk children at a Humble ISD elementary school. Inspired by the students’ fascination of bird song, he wrote The Stories of Mimm, an oral story that offers a fanciful answer to the riddle of “why mockingbirds mock” and a lesson about conservation. When not birding he can often be found wade fishing in the waters around Galveston. He is a business consultant and writer.