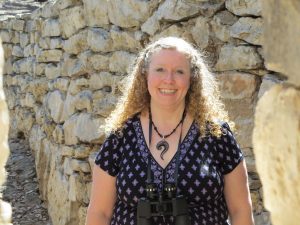 Kristine Rivers grew up in Manvel, Texas and began birding at a very young age; by the time she was 14, she was serious enough about it that she participated in her first Christmas Bird Count with the National Audubon Society. She attended the University of Oklahoma as a Professional Zoology major with a primary interest in Ornithology, and was accepted into the Junior/Senior level Ornithology class as a Freshman. Although she didn’t end up following that career path, she has continued to be an avid birder for her entire life. She has participated in every year of the Brazoria Christmas Bird Count since its inception in 1984, and was instrumental in working with the founder and compiler to start it back up again in 2010 after a 16-year lapse (the last year it had been held prior to that was 1994.) She has been an Area Leader for the Brazoria CBC (now known as the Brazoria-Columbia Bottomlands CBC) since 2013. In addition, over the years she has participated in many other Christmas Bird Counts, including the Houston CBC, Freeport CBC, and Brazos Bend CBC. She has also participated in the Texas City Prairie Preserve Bird Count.

Kristine has been the Birding Instructor for the City of Pearland, the City of Meadows Place, the City of Missouri City, and Galveston’s Osher Lifelong Learning Center (OLLI). These engagements variously included teaching children ages 6–14 in summer camp, and providing workshops and classes for adults in both Beginning Birding and Intermediate Birding. She developed all of the curriculum, presentations, and field trips for these programs. She currently leads family-friendly nature events for the City of League City. She was a liaison for FeatherFest in 2016, a field trip leader in 2017, a presenter and field trip leader in 2018, and will be presenting and leading again in 2019. She is a popular guest speaker, and has given many presentations to the Galveston County Audubon Group, a division of the Houston Audubon Society; the Ornithology Group, Houston; and Texas Master Naturalists.

Kristine became a certified Texas Master Naturalist in 2016, and soon began leading workshops and teaching summer camp classes about other native Texas wildlife in addition to birds. She just completed her three-year term as President of the Cradle of Texas Chapter of the Texas Master Naturalists which she held since January 2017.

Kristine loves sharing her passion for nature and wildlife with others, and founded Birding for Fun in 2015 to provide educational services, field trips and guided tours, and offer select products to the public. She is available for speaking engagements for your organization, and can develop workshops and field trips or guided tours specific to your needs. For more information, please contact Kristine by email at kristine@birdingforfun.com.

Clear Creek winds its way from Clear Lake through League City in Galveston County, providing beneficial freshwater riparian edge habitat to a wide variety of bird species and other wildlife. This pre-festival trip explores some of the hidden gems in the Clear Lake Loop of the Upper Texas Coast – Great Texas Coastal Birding Trail, beginning with the beautiful Dr. Ned and Fay Dudney Clear Creek Nature Center. We’ll hike along the trails there looking for spring migrants such as…

This pre-festival trip will explore some of the best birding spots on the Clear Lake Loop of the Upper Texas Coast - Great Texas Coastal Birding Trail. This area contains a variety of habitats, including approximately 60 acres of oak woodlands, riparian edge habitat along the bayou, freshwater ponds, wetlands, and bay waters. This amazing habitat diversity attracts a wide variety of resident and migratory bird species, as well as other wildlife such as turtles, deer, alligators, and swamp rabbits. We'll…

Birders will find this workshop and field trip the perfect introduction to coastal birding. You will spend the first hour in a workshop learning about the diversity of species, as well as various techniques to identify birds on the Upper Texas Coast. After a quick 15 minute break, we will board our bus and head out to one of the hotspots on the Upper Texas Coast to view these incredible birds. The trip is designed to give each participant the opportunity to practice the techniques learned in the workshop, in order to develop confidence in the field.

From Backyard to Beachfront: Birding Basics Workshop and Field Trip

This workshop and field trip is for beginning birders learning the fundamentals and those wanting to brush up on their birding skills. You will spend the first hour and 15 minutes in a workshop learning how to get started and improve birding skills, techniques, and confidence. Topics include: birding practices, optics selection and use, field guides, bird identification considerations and techniques, field notebooks, birding etiquette and ethics, and common birds of Galveston Island. Emphasis will be placed on the field…

Don’t miss this popular field trip to the Brazoria National Wildlife Refuge, which is designated an Internationally Significant Shorebird site and contains more water than land within its 44,000+ acres.

Situated between the Brazos and San Bernard Rivers is one of Texas’ most biologically diverse regions, the Columbia Bottomlands. The Nature Conservancy safeguards a slice of this “globally imperiled” habitat for wildlife and nature lovers alike. Urbanization and development continue to threaten this region and jeopardize the millions of migratory songbirds that use the Columbia Bottomlands as critically important resting, feeding and stopover habitat. Radar evidence indicates that as many as 29 million birds from 237 species move through the…