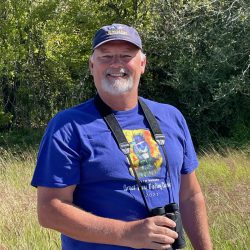 Greg grew up on the family farm in upstate New York, inheriting a stewardship for nature and a lifelong appreciation for the wonders of water. Texas A&M University brought him to Galveston in 1985, which immediately became home. His professional animal care career began in 1988 at Sea Arama-Marineworld, and progressed through a stint at the Marine Biomedical Institute working with cephalopods, and finally taking on the animal care manager’s role for the first time as Moody Gardens’ Rainforest supervisor in 1993. In 1999, he took the opportunity to serve as site manager for marine mammal operations in Taiji, Japan and Beijing, China. In 2001, he assisted in the establishment of an open water marine mammal and small aquarium facility in Subic Bay, Philippines. He returned to Texas in 2002 and re-established roots in the Galveston area as a new dad, and Moody Gardens Animal Husbandry Manager. Greg is also the current Houston Audubon Board President.  Also under the GINTC description that I worked with the collaborative team to achieve Bird City Texas certification for Galveston

Since 2003, Greg has partnered with GINTC in several nature tourism and birdwatching activities and events, all designed to create enthusiasm for the fantastic natural environment that our Island offers. He was a part of the collaborative team that achieved “Bird City Texas” certification for Galveston. Greg serves on the GINTC board, is the current Houston Audubon Board President and is the chapter chair for the Galveston County Audubon Group.

High Island & Other Hotspots by Bus #1

Boy Scout Woods, Smith Oaks, The Rookery, and more! The accident of geology makes the Upper Texas Coast a beacon to weary neotropical migrants finishing a 10+ hour, nonstop flight across the Gulf of Mexico. From under an ancient sea, a salt dome emerged. After a few thousand years the dome reached just 38-feet above a pancake-flat coastal plain where it became covered with 20-30-foot oak trees, creating a vast canopy. This created High Island, which is now a refuge…

Greg is so much fun to bird with that we have added a trip focused on just Galveston Island! We’ll let Greg decide where he wants to go depending on what he’s scouted out before the festival. He’ll check out Corps Woods, Lafitte’s Cove, the East End Flats, Sportsman Road, and sites all the way to San Luis Pass so that he’ll be able to take you to all the best birding spots on the Island. Get ready to see…

Join Jon Dunn, one of North Americas most knowledgeable ornithologists, for a birding tour of the Bolivar Peninsula. This peninsula stretches east of the confluence of the Galveston Bay system and the Gulf of Mexico. This barrier peninsula is the result of natural processes and human activity. Its natural features pull in fisherman, beach combers, shell collectors and birders. Thousands of Houstonians seek out Bolivar’s beaches every weekend but on any given day the birds far outnumber the humans. The…

Join Jon Dunn, one of North Americas most knowledgeable ornithologists, in exploring areas of Galveston Island that bring together our most prolific species, shorebirds. As a leader for Wings Birdwatching Tours for 45 years, he has acquired extensive knowledge in how to parse out and identify the many varieties. While viewing these birds, Jon will help you learn the finer points of identifying them. Come out and enjoy a casual morning of birding to end your FeatherFest experience with Jon…