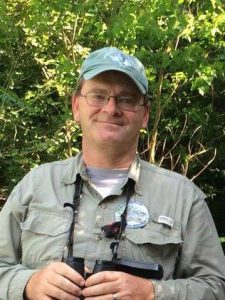 David began birding casually in High School in the late 70’s, but didn’t become a real “hard core” birder until about 1993. Since then he has served as the chairman of the Outdoor Nature Club – Ornithology Group in Houston, and is a past president and secretary of the Texas Ornithological Society (TOS). David was one of the founding board members for the Friends of Anahuac Refuge (FOAR) in 1995 and has served as vice-president and president of FOAR, and currently serves on the board as secretary. David has led the popular “Yellow Rail Walks” at Anahuac NWR since 1996. He is an active leader for field trips state wide for TOS. David has organized and led more than 20 field trips to Belize and Costa Rica.

When David isn’t birding he runs TEXBIRDS, the state wide email birding list and dreams up crazy birding activities like the Texas Century Club and the Local Patch Challenge. Other interests include writing a Houston Food Truck Review Blog and Flyfishing.