Birding on and around Galveston Island

Galveston Island is one of the top locations in the country for birding. It has a rich variety of habitats – beaches, wetlands, grasslands, woods, ponds, and bays – in a small area that are home to many common year-round species, as well as numerous others that visit briefly or for part of the year.

Birds visit en-route from and to Central and South America, north in the spring, south in the fall. Most pass through after stopping for food, water and rest, as very few spend their summers on the Island and breed locally. While Galveston is on the western edge of the Gulf of Mexico, it is in the epicenter of the spring migration, as trade winds bring them right to our doorstep.

The Island is also an important wintering ground for numerous species that spend most of the year farther north. More than 300 bird species may be seen throughout the year somewhere on the Island. During FeatherFest, over 200 species are typical, such as common year-round birds, spring migrants and late wintering birds.

The sighting frequency definitions best relate to the entire “Spring” period which is commonly defined as March through May. The birds listed below are far more than might be observed during FeatherFest because some birds prefer habitats that might not be visited, and because FeatherFest has not always been held in mid-April. FeatherFest visitors might be too early to see those Neotropical birds that migrate north through the area later, and too late to see those Nearctic birds that have wintered on the Gulf Coast but have already moved northwards. The following list of birds seen during FeatherFest 2006 – 2019 gives a good indication of what you could see in future years at the same seasonal time. (FeatherFest was not held in 2020 due to Covid-19.) 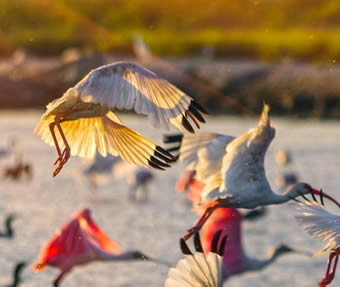