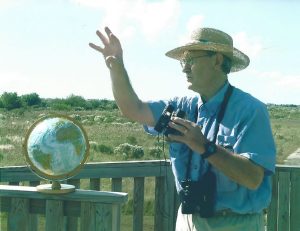 Mort Voller grew up in the UK and, from his earliest years, spent hours outdoors exploring and appreciating nature. Sciences were a strong point at school and at university where he spent time in the field studying geology.

After years of corporate life in the UK, Canada and USA (mainly Houston), he and wife Brenda chose to retire to Galveston Island since its naturalness had appealed to them and to their children through many visits. Latent interest in nature and birding in particular led to learning more about the wildlife of Galveston Island from Jim Stevenson. Mort started and helped lead the Sunday Birding walks at Galveston Island State Park which led to an involvement with FeatherFest 2003 leading Birding by Kayak trips. From there he went on to serve on the FeatherFest 2004 Committee and later to actually coordinating the incorporation of GINTC and leading FeatherFest development thru 2008. Mort is not a lister and does not claim to be an ace birder. He’s an amateur and just loves to take folks out and enthusiastically engage them in the birding experience, especially on Galveston Island. He is registered as a Birding Pal.