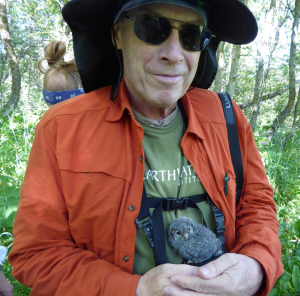 Bob Honig has spent many years observing and studying natural history, particularly birds, dragonflies, and damselflies.  He is a member of the Advisory Board of the Katy Prairie Conservancy, after having served on its Board of Directors for 25 years.  He is a past Chairman of the Ornithology Group of Houston’s Outdoor Nature Club and a former Compiler of the Buffalo Bayou and Brazos Bend, Texas, Christmas Bird Counts.  Professionally, as an environmental consultant, he has addressed such diverse issues as endangered species, wetlands, archaeology, recycling, and sustainable development, and performed numerous bird surveys.His work has taken him throughout North America and has included environmental surveys in Bolivia and the Algerian Sahara.  Bob has led — often with his wife, Maggie — numerous field trips/tours throughout the Houston area, elsewhere in Texas, to Glacier National Park in Montana, and to the Asa Wright Nature Centre in Trinidad; and they have been part of Earthwatch expeditions to study caterpillars and their parasitoids in Costa Rica, sustainable watershed management in California, and Flammulated Owls in Utah.