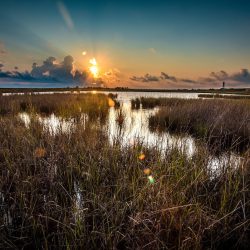 The group will travel by bus to the Nature Conservancy’s Texas City Prairie Preserve. This preserve is 2,303 acres of coastal prairie at the intersection of urban expanse and rural beauty. The coastal grasslands found here are vital to the natural resilience of the Gulf Coast—prairies and marshlands act as a natural buffer during storms and hurricanes, absorbing and dispersing water from storm surges and floods. The sponge-like qualities of the prairie are also important for filtering the freshwater that flows into the Gulf of Mexico—more than three million gallons enter the Gulf from the Mississippi River alone.

Normally, only 40 acres of this preserve are open to the public. With the permission of preserve staff, we will bird through grassland prairie and wetlands, on to the large dike that protects Texas City. The wetlands support migratory and year-round populations of waterfowl, shorebirds and wading birds and the preserve provides a home for wintering and migrating grassland songbirds. Birds such as the brown pelican, white ibis, peregrine falcon, white-tailed hawk, Forster’s terns, and seaside sparrows routinely inhabit the preserve. Various species of ducks, gulls, herons, egrets, terns, raptors, shorebirds, and flycatchers can also be viewed here. While traveling through the preserve you will also see many of our native plants include big and little bluestem, yellow indiangrass, switchgrass, eastern gammagrass, gulf cordgrass and the rare coastal gayfeather.